We are very sad to inform you that we lost Ozy last month after a short illness.

Ozy joined us here in Nether Stowey just after we opened the guesthouse and grew up in a house full of people and dogs and he welcomed each and every one of them – especially when they would sit down for a cup of tea and biscuit on arrival. He loved fetching and carrying and all our guests will remember his after breakfast napkin routine when he brought the napkins to the kitchen after retrieving them from guests’ laps. No doubt, environmental health would have had a view on this – had they known. 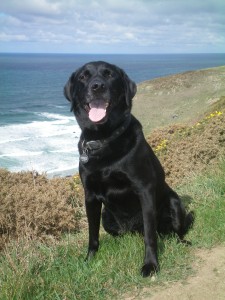 Ozy loved the Quantocks and his daily walk up into the hills. However busy we were, we always found time for a walk, rain or shine, and this often turned into the highlight of the day –  and kept us all fit. Ozy was also the first dog to walk the Coleridge Way and his contribution to the Companion Guide was invaluable and without him we probably wouldn’t have walked the route so many times.

With his pet passport, Ozy travelled around Europe and visited France, Germany, Belgium and Luxembourg usually writing a blog about his take on our European cousins and the state of the various nations. He was never particularly reverential – unless food was involved.

Ozy’s blogs were read widely and, from the comments received, much liked. In fact, they became so well known that we would turn up to marketing training days, only to find the blogs being used as examples of good practice. On other occasions we would get into conversation with complete strangers who would say “So you’re Ozy’s owners – we always read his blog.”

However, what we will miss most is him just being around and being our friend. He was a lovely dog.

Everyone is doing their DNA at the moment. Ian has had his done and he is 42% western European, 36% Great British, 12% Scandinavian, 8% Iberian Peninsula and 2% Irish. This sort of follows wot Ian thinks his ancestry should be on the basis that he was originally a mad Calvinistic Huguenot from France back in the seventeenth century and obviously has striking Viking good looks (Ian wrote this bit). I pointed out that Sandi Toksvig was also a Viking and she’s not known for her looks!

So if Ian could have his done, then why not me? Most dogs know where they come from from their smell, this is why dogs are always sniffing each other’s bottoms. However, there is now a new test, also known as DNA – Dog Nose Alternative.

The first thing you need to do is dribble some of your dribble into a test tube. Ian got me to do this by mentioning ‘kibble’. Then you send off the dribble by putting it in the red slotty thing on the corner of the road, opposite the George pub.  Ian then got the results on the screen thing on his desk.

My results were very accurate. Firstly, part of my DNA is from Portugal. This is because my ancestors were originally Portuguese fishing dogs. Next I also have DNA from Newfoundland w

hich is where I get my name from. Lastly, I am from Bridgwater, cos this is where I was born, in a Wendy house, in a garden.

Wot was even more interesting was my characteristics which show intelligence, my swimming ability and why I’m always hungry. The ven diagram left shows this quite clearly. I wonder where cats come from? 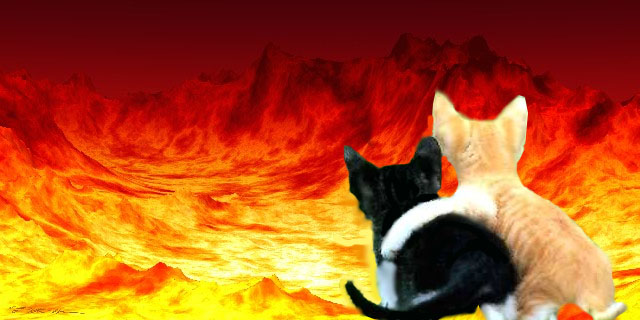 Me on the funicular railway

It’s my birthday today – I’m 14. This is very old for a Labrador and according to the Pedigree Petfoods site I am 103 in human years. I should have got a telegram from the Queen in about March, but probably she was too busy to send Labradors messages.

I didn’t want anything for my birthday, if I need something, Ian buys it for me and, to tell you the truth, apart from biscuits I don’t really need anything. What I did want was to go to the beach and have ice cream, so Ian and Lynne took me to Torquay for the weekend.

We stayed in a small hotel overlooking the sea what was very nice (it was called the Downs – very dog friendly) and I did little walks a few times a day as my legs are a bit wobbly nowadays. Having said that, they did drag me up and down cliff paths a few times, although I insisted on going on the funicular railway on the way back.

Me losing my money on the penny falls

On Sunday we went to Paignton for a walk on the beach, paddle in the sea and a vanilla ice cream in a tub – BRILLIANT!

Today has not been quite as much fun as it could have been. It was sleeting on my walk this afternoon and then the vets was open so I had to go in for a lump what has appeared on my bottom. The lady vet stuck a needle in it and I have to admit that it made my eyes smart a bit!

So, now that Ian has sent the second edition of his book to the printers, hopefully he will have more time to type up my blogs. 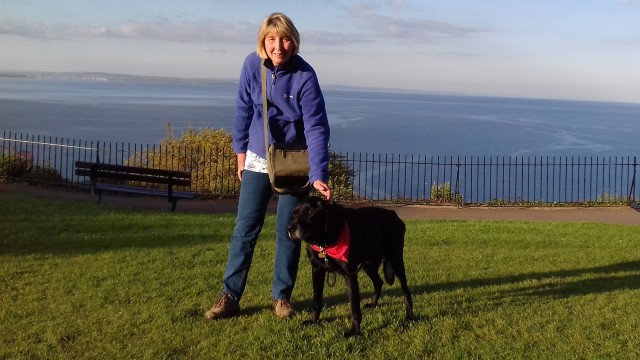 I have been asked wot my opinion is on the United States election, so I have been watching the debates on the television while Ian has been doing the ironing and this is the way wot I see it.

There are two people wot can be the President. One is called Hillary Clinton and the other is Donald Trump. According to the press one is a complete Shih Tzu, the other Labradoodle. 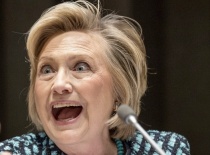 Hillary Clinton is mistrusted by lots of the American public – mainly because she is a politician and sucks up to people wot she thinks will support her. Supposedly this is not the way to do things in America! But wot is reely a problem is her using her own e-mail account.

Now I am supposed to use the official Old Cider House account, but when I don’t want Ian to see wot I’m saying I often use my woofwoof@theoldciderhouse.co.uk account. And this is the problem; the powers that be can’t see wot is being said. In fact I’ve now deleted my e-mails, all 62,320 of them – admittedly most of them were about Nigerian dogs wanting to send me money and non-prescription worming tablets but some might have been important.

On the other hand, Donald Trump is like a Spaniel on ketamine. Firstly, he has a cat on his head. As a rule of thumb, don’t vote for people who have cats on their heads.

Secondly, Donald Trump wants to build a wall across America to keep the Mexican Chiwawas out. This is estimated to cost in the region of $12BN. Now, I don’t know about you but I think Chiwawas are not very big and probably breezeblock height would be enough to stop them. The border is 3,145 kilometres or 1,954 miles. A breezeblock is 440mm x 215mm. therefore using Jewson’s Brick Calculator I reckon it will take 7,765,433 bricks (including a 10mm mortar joint). Wicks sell these at £1.90 a brick so that would be £14,753,500 or $18,048,841. Even if you made the wall double the height then this would only be $36M and you’d probably get a discount for bulk buying. I’m not sure he’s as good a businessman as he says.

So, who will the Americans vote for – just seven days to find out.

If you want to discuss the election with me then use my secret account woofwoof@theoldciderhouse.co.uk

I have been asked my opinion on the Olympics wot have just finished by Alan from Sittingbourne.

While Team BG did reely well, most of wot they did is wot I do (or used to do) as a matter of course. So here’s my take on the last few weeks:

Jumping into green water – I’ve been doing this for years. Give me a stagnant pool of green infested algae or pond weed and I’m in like a shot. Never mind that I’m on my way to a restaurant or that Ian has forgotten my towel – green water is for jumping in.

Running after a tennis ball – Wot’s all this fuss about Andy Murray winning a gold? As far as I can see he didn’t manage to catch the ball once in his mouth. In addition, he had a tendency to want to get rid of the ball – tennis balls are for keeping and chewing up.

The ‘triple dump’ – This is where you do three or more poos whilst walking along the pavement. I have got reely good at this lately and think I may deserve a world record.

Modern Pentathlon – the running and swimming woz okay and I always use fencing to have a wee up. I don’t like horses and misheard the word ‘shoot’. All in all, not my best event.

But I’m now doing my own Olympic event – I am walking 500 miles before the end of the year. This is for charity – The National Animal Welfare Trust – and Ian even set up a charity account for me at https://www.justgiving.com/fundraising/Ozy-the-Labrador if you can give me a penny a mile that would be fantastic and it would help all the poor dogs with no mummies (please note no money will go to any cats).

Terrier May and the Cabinet

Terrier May is now our new Prime Minister after Andrea Leads-on dropped out of the race due to comments she made about Terrier not having any puppies.

Having Terrier as PM should be interesting and she has now put together her kennel of people wot will be running the country. Phillip Hammhound will be the new Chancellor of the Exchequer and will be in charge of counting the number of biscuits and making sure everyone gets a treat etc. The Home Secretary is Amber Pug and she will be doing the job wot Terrier did. George Osbone has got the sack because he lost the rufferendum.

Wot is really interesting is that Boris the Bulldog has been made Foreign Secretary. Boris is not very diplomatic sometimes and is likely to upset Alsatian Merkel, Great Danes and practically every other European breed of dog. Having said that, the ‘Bulldog’ is forthright and calls a spade a spade and wot you see is wot you get. 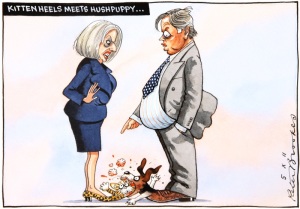 One thing wot intrigues me is why Terrier has been reported as standing on kittens? Not that I’m saying this is a bad thing, it’s just that I thort the cat lovers of the country would have something to say about this.

Finally – does anyone one else think Laura Kuenssberg is working more than a 48 hour week? Whenever I turn on the telly she’s there running between Westminster, Number 10 and Jeremy Corbyn’s little white house on that council estate … and John Pienaar’s been dragged out of retirement – poor bloke.

So why are we so rubbish at football?

Last week in the Euro 2016 men chasing a ball around the field game, England lost against a team called Iceland wot is not even a country but a shop where you can buy frozen stuff. This woz very bad, especially after losing the EU vote. Wot could possibly get worse? The UK getting ‘nil’ points in the Eurovision Song Contest?

Roy Dogson, the England Manager has resigned saying, “I am really disappointed. I didn’t see the defeat coming. Nothing in the first three games here gave me any indication that we would play as poorly as we did.” Obviously he hadn’t been watching the telly like everyone else.

So wot can we do to make things different next time?

Whatever happens the next big match is 4th September when England play Slovakia in the World Cup qualifier. Either they have to be gud by them or don’t bother and save us all the disappointment of losing in the first round in Russia.